The first part of the project was to build a suitably loud ipod Amplifier that wouldn't break the bank.  I chose to follow this example:

I used the same circuit, but made some design adjustments to the casing and the speaker choice.  At first I used a speaker that I ripped out of an old telephone, but it overloaded in about 30 seconds.  So instead, I used a 2.5 inch, 8 ohm speaker from You-Do-It Electronics, which ran me about $2.  I also found a pretty good looking box for my circuit lying around the house.  Here is the first edition of the assembly:

I used a cup to amplify the signal a little bit more.  However, after poorly soldering the circuit together, I had to re-do the whole thing and I ended up with a better result.  Here is an image of the new version's guts: 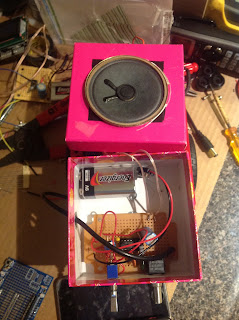 This little thing can pump a jam nicely and should work ever so well on the "yet to be named" robot.
By Sander Idelson at June 04, 2012