Some Computer Vision For Kicks

Over the past few weeks, I have been working on a few different projects to broaden my skills and learn about some new technologies.  One area that I have been jumping into is computer vision.  Recently, I have been working my way through the book "OpenCV with Python Blueprints".  Some of the projects I have done so far include building a Cartoonizer and some Feature Matching.  Let me show you! 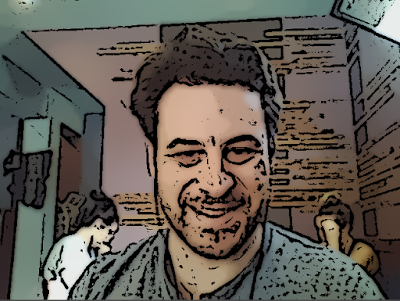 This is me just after finishing the Cartoonizer.  As you can see, the program cartoonizes live video and shows the result in real-time.  The process involves:
- Applying a bilateral filter in order to smooth flat areas while keeping edges sharp
- Converting the original to grayscale
- Applying a median blur to reduce image noise
- Using an adaptive threshold to detect edges
- Combining the color image with the edge mask

The result is really great!

Another project I just completed is the Feature Matching project.  The idea here is to find robust features of an image, match them in another image and find the transform that converts between the two images. 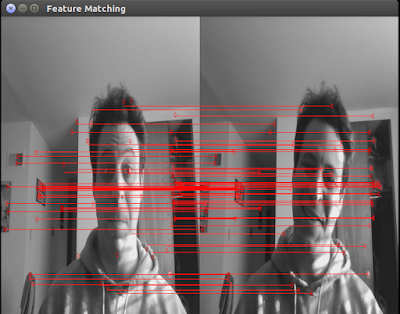 Here is an examples of what that looks like in practice.  On the left, is the still image that I took from my computer and on the right is a live image of the scene.  The red lines show where the feature in the first frame is located in the second frame. This seemed to work pretty well for very similar scenes, but had some trouble when I changed the scene significantly.  However, it is not unexpected that it would fail on different scenes, because the features are not very similar at all.

Here is how I did it:
- First I used SURF (Speeded-Up Robust Features) to find some distinctive keypoints.
- Then, I used FLANN (Fast Library for Approximate Nearest Neighbors) to check whether the other frame has similar keypoints and then match them.
- Then, using outlier rejection, I was able to pare down the number of features to only the good ones.
-  Finally, using a perspective transform, I was able to warp the second image so that it matched the first (not shown here).

I am currently in the middle of the 3D scene reconstruction project.  This something I have been meaning to do for a long time and I am currently really enjoying working on it.
By Sander Idelson at February 13, 2018