This summer I am doing a really cool project with a quadcopter and an infrared camera.  The idea is to create control system that uses image detection of a fire to fly around the fire and report its coordinates to a home computer.  In order for my project to work, I need an inexpensive digital infrared camera. A professor that I talked to told me that there is an easy way to modify a digital camera to an infrared (or close to IR) camera.  The method is to replace the visible spectrum filter that is in there with an IR filter.  After doing some research, it turns out that exposed 35 mm film negatives are excellent IR filters and can block out most of the visible range.  The goal of this project was to replace the filter in a webcam with an IR filter.  The result was a blurry, but usable IR camera.

First, I took apart an old Logitech webcam that I had lying around.  I took off the plastic casing and found the lens connected to the board.  This is what it looked like: 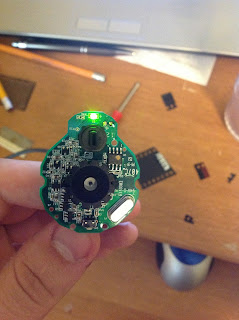 After removing the lens from the board, the filter sat on the back.  The lens could be unscrewed from the filter holder, so I removed that as well, being careful not to smudge the lens.  Lo and behold, inside the filter holder behind the lens was the visible spectrum filter.  I tried removing with a razor blade, but it did not budge, so I used the old brute force method and smashed it out.
More after the break


Then, I needed to replace that filter with the IR filter.  I had acquired some exposed negatives by placing an ad on Craigslist and going on somewhat of an adventure to retrieve them.  Finally, after getting them, I cut them up, layered two on top of each other and taped them onto the back of the filter holder.  I had to be careful not to cover the image area with the tape.  Here are some pictures of the film negative.\ 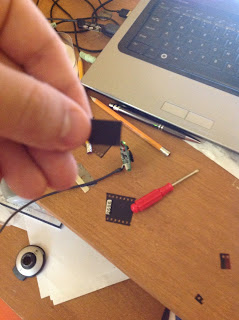 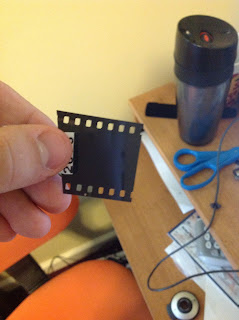 Finally, I put the camera back together and tested it out.  Here is an image of camera put together without the plastic.  As you can see, the tape sticks out, but makes no difference. 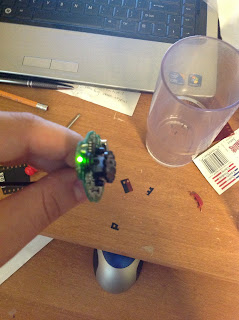 The image that came out was blurry due to the fact that only 1/4 of the normally used pixels were in use because it is only detecting red.  I will update this pose when I get a better picture of the IR image.